My route around Britain 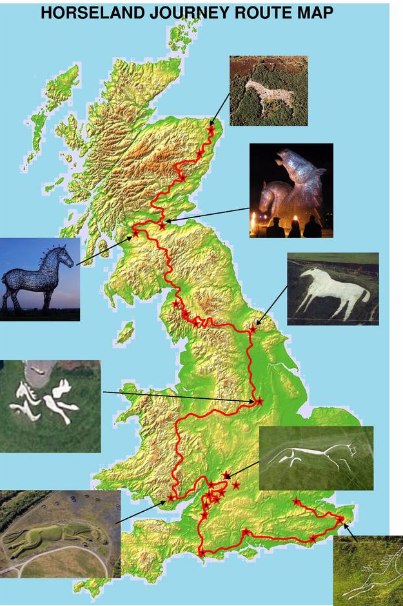 My starting point was Scotland’s only white horse hill figure - the Mormond white horse, just north of Strichen, in Aberdeenshire.  Being way too far north for the chalk into which Wiltshire’s white horses are carved, it’s made of quartz.

From Mormond, we followed the Buchan and Formatine Way south along the disused railway to Udny Station – probably the easiest bit of my whole route. We then cut cross country to Inverurie, mainly following back roads, after meeting locked gates on most of the tracks we tried to use. I was determined to visit the Pictish carved stones, in particular the Inverurie horse, to see for myself what it revealed about Britain’s horse history.  From Inverurie, we followed a mixture of hill and forest tracks and paths south-west via Tarland to Ballater, and then climbed over the Cairngorms via the Capel Mounth to Glen Clova.  The Minister's path took us through to Glen Prosen, from where we followed the old drove road through Glen Quahrity, Lintrathen and south to Meigle to visit the Pictish stone museum, to learn more about the significance of horses to our Pictish ancestors. From Meigle we wended west on quiet lanes, over the Tay to Murthly, crossing under the A9, and then through Strathearn to Auchterarder.  More old drove roads took us through to Glen Devon, and down to Dollar, from where we followed back lanes, disused railway tracks and the Fife Coastal Path to the Kincardine Bridge, where we crossed the Forth estuary to Falkirk to visit the Kelpies - Scotland’s most celebrated sculpture, guarding the junction of the Forth and Clyde Canal with the Forth estuary.  Continuing west, we followed in the footsteps of the horses who towed barges along the canal towparth, branching off at Kirkintilloch to visit the Clydesdale horse alongside the M8 at Easterhouse.  Drumpelier Country Park linked us through to Coatbridge, from where we followed the disused railway to Airdrie, leafy green lanes to Allanton, and then through Blacklaw windfarm to Forth,

Old Roman and drove roads, paths and tracks used by marauding cattle thieves, tinkers and tradesmen then led us south up the Tweed valley to the watershed with Dumfries and Galloway, from where we followed the Annandale Way south to Lockerbie for a couple of days’ pit stop at home.

After restocking my saddle bags, I’ll be heading south over the border, skirting around the Solway Firth down to visit the Fell Pony museum at Dalemain, near Ullswater.  From there, we’ll be climbing up High Street, where the Romans ran trotting races, and then drop down to Haweswater to pick up the old route along which ponies once carried coffins.  As we head east we’ve got a few ghosts to lay to rest on the Howgills, where Micky, Magic, and two of my other ponies originated.  The Queen’s equary and I were amongst the many buyers at the dispersal sale of the Murthwaite Fell ponies in 2015 following the death of one of the Fell pony’s world renowned breeders.  Lots of people saw the sale on Countryfile, and learned about the significant implications of Tom Capstick’s death on the vegetation and character of the countryside, as well as Fell ponies.

A short section of the Pennine Bridleway over Mallerstang and “Lady Anne’s Highway”, the route ridden by Lady Anne Clifford in the 16th century traveling between her various properties, will take us over to Wensleydale, from where we’ll be heading east past the gallops at Middleham to the Kilburn white horse carved into the southern edge of the North Yorks Moors.  Turning south again, the next highlight on our map is a 21st century white horse in the middle of Sheffield.  From there’ we’re turning west again through the Peak District to Cheshire, where hunting remains an essential part of rural life. The Kerry Ridegway and other historic routes will take us south through the Welsh borders.  If we have time, we’ll be nipping into Acton Scott, one of the few places where horses still provide the main source of power, as they did in Victorian times. Our goal in south Wales is Sultan the giant pity pony sculpture near Caerphilly, who commemorates the pit ponies which played such a vital role in the economy of the Welsh valleys.

It took quite some effort to establish that legally I’m not allowed to ride over either of the Severn Bridges on horseback, and it absolutely goes against the grain to stick horses in a trailer on a long ride.  So there’s no choice but to ride through the Forest of Dean, hopefully meeting up with some horse loggers along the way, skirting north of Gloucester and Cirencester, and then along the Ridgeway, reputedly the oldest track in Britain with an uninterrupted record of thousands of years of equestrian use.  The Uffington white horse is one of the key landmarks on my trip.  It marks the start of my tour of the white horses of Wiltshire.  I’ll be asking those I meet along my way why these iconic figures resonate with so many people, regardless of their interest in horses.

Next stop the white horse at Weymouth, then on to Southampton to pay homage to the grave of Warrior, the original War Horse, from where we’ll be riding east over the South Downs to visit the white horse at Eastbourne.  Our final white horse is the enigmatic figure carved in the hillside above the entrance to the Channel Tunnel at Folkestone.

It’s been my dream for however many years to ride over Tower Bridge, so if I’ve got enough time and energy left, the final leg of my journey will be up to London, over Tower Bridge, via Horseguards Parade, and along the sandy tracks through Hyde Park which the Household Cavalry use daily to exercise their horses, finishing at the animals in war memorial.

Click on either of the logos below to help me reach my target of £20,000