Me and my ponies 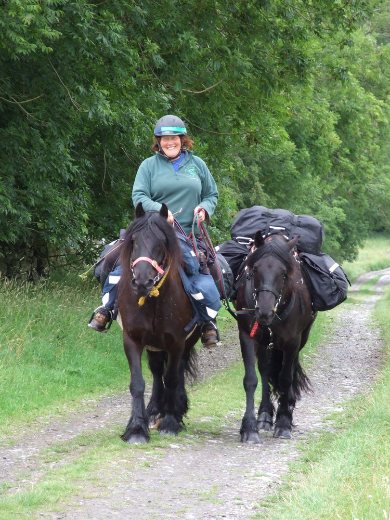 The picture above will give you an idea of who we are.  It was taken on my ride from Skye to Smithfield in the footsteps of the drovers in 2010.  Perhaps wishful thinking to say I/we haven't changed much since!

Both on this picture, and for the whole of  my Horseland Journey, I was riding Murthwaite Mikado (Micky), a registered Fell pony gelding who we bought off the Fell at 2 years old.  At that time he'd hardly had any human contact.  For the next two years he grew (outwards and in character, not upwards).  I backed and "broke" him at 4 years old, mainly for my son Jake to ride.  Jake had great fun with Micky, hunting, doing Pony Club and all sorts of other things, but Micky had very strong views on what he wanted to do, and at what speed,and in the end Jake moved on to a Friesian x Welsh Cob better suited to tetrathlon, and Micky became mine.  When my own Fell pony Lancer contracted tick fever on our ride from John O'Groats to Lands End, Mikado was only too happy to step into the breach, and at 8 years old rode from Callander to Lands End, as keen after >1000 miles as he was at the start.  Officially Micky stands at only just over 13 hands, but rides and feels much bigger.  When we're at home, I drive Micky as often as I ride him.  He's a natural at both (albeit with dodgy brakes!).

I loved Micky's temperament so much that when I realised Lancer's riding days were drawing to an end, I went back to the same breeder, Tom Capstick, to buy another Fell pony,  I bought Murthwaite Magic Spell as a yearling, again virtually untouched off the Fell. In real life, she's just called Magic (although she also goes by a lot of other names, mainly 4 lettered). The first summer after I broke her as a 4 year old, she rode with me across Wales, and we've travelled together quite a bit since.  She's my pack pony on the picture above, and surpassed herself for three months on my Horseland Journey.  In May 2019 my beloved Magic got laminitis (mainly because my back was too bad to ride much for the past few years and the long trips we've always done together previously suit her well).  Although much improved, she still isn't sound enough to venture far.  Meanwhile Micky and I aren't getting any younger and I've concluded that if we don't finish our ride this year, then who knows what could happen by next year.

So this time Micky's half sister Murthwaite Morning Glory is coming as pack pony.  I bought her aged 11, with her 6 week old filly foal Posh, at the Murthwaite dispersal sale after the sad death of Tom Capstick in July 2015.  Despite having lived her life up until then high on a hill breeding foals, Glory very quickly took to the idea of being a working pony.  She's got very big boots to fill (matched by the size of her belly!).

Click on either of the logos below to help me reach my target of £20,000